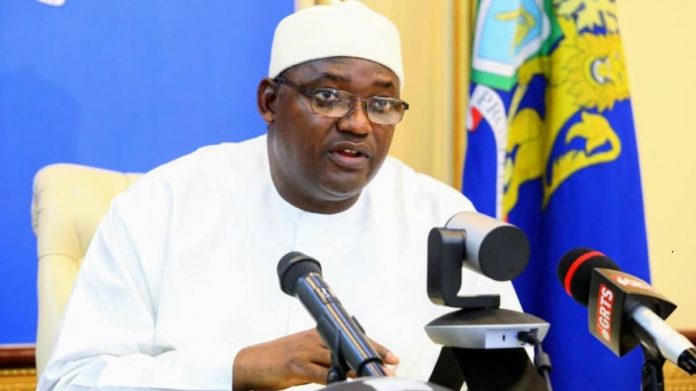 President Adama Barrow in a recent interview on the State of Affairs television programme on the QTV, said the Gambian economy is growing at “6% plus”.

The current government took over the reins of government under very difficult circumstances after the outgoing Yahya Jammeh administration refused to willingly relinquish power. This prompted a regional military intervention in The Gambia which subsequently affected tourism- a major income earner for the country.

Business activities were also temporarily halted, which in turn negatively affected the economy. The country was also struggling with a very high, unsustainable public debt situation which was at 120%, debt to GDP ratio.

President Barrow when touting the achievements of his administration in turning around the fortunes of the country in the recent interview said:

However, “our economic growth: we are growing at 6% plus,” he boasted.

If President Barrow was referring to the average performance of the economy during the four years prior to becoming president, then average growth between 2013 and 2016 was 1.875%, according to data from the World Bank and the IMF.

It is accurate that the GDP growth rate recorded in 2019 was at 6.1%, according to International Monetary Fund.

However, this declined to zero percent growth in 2020, due primarily to a sharp contraction in revenue from the tourism sector caused by Covid-19.

A press release from the Finance Ministry sometime ago said: “The economy is expected to grow by 4.9% in 2021 with some recovery in the tourism sector anticipated in the fourth quarter of this year.”

The IMF made a similar forecast in their June 2021 report:

IMF: “The second wave of the COVID-19 pandemic has dampened economic activity, with attendant socio-economic costs. However, with the global vaccine rollout, development partners’ support of The Gambia’s vaccination campaign, and the resilience of some economic sectors, growth is expected to rebound to 4.9 percent in 2021.”

The projection from the Central Bank of the Gambia is even lower. The May, 2021, Monetary Policy Committee of the Central Bank of the Gambia, states the following: “The Central Bank’s Composite Index of Economic Activity (CIEA), which is a statistical measure of aggregate economic activity, forecast the economy to grow by 4.1 percent in 2021 indicating recovery in economic activity that started in Q4, 2020 and is expected to continue in 2021 as some of the lockdown measures were relaxed to allow movements of persons, goods, and services.”

The African Development Bank made the following projection:

“The outlook is positive, if the economy reopens, good rains aid agriculture, global demand improves, structural reforms are instituted on non-performing SOEs, monetary policy is accommodative, and negotiations to restructure public debt continue as a complement to fiscal consolidation efforts. Real GDP is projected to pick up gradually—growing by 3.2% in 2021 and 5.1% in 2022.”

Growth is expected to rebound this year but no available statistics including from Finance Ministry, Central Bank and the IMF puts the figures at over 6%.

The claim is inaccurate.

Note: We have reached out to State House media team for a comment on our findings but we have not received any response as at the time of this publication. We will update the story as soon as we have a response.