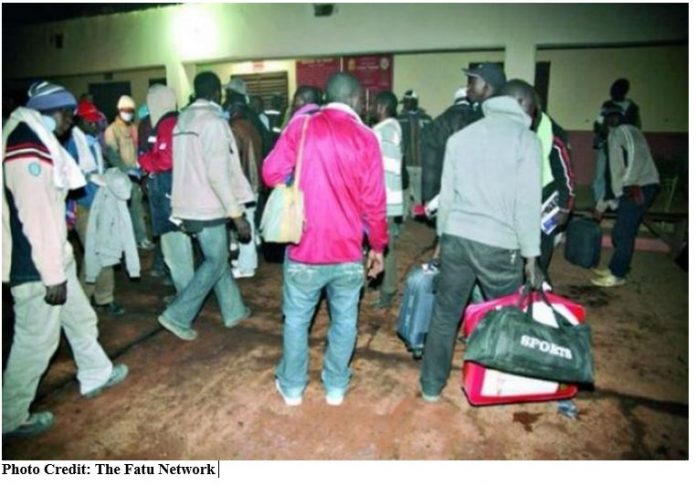 Over the years, an increasing number of Gambian youths continue to embark on the irregular journey to European in search of a better life.

Given the perilous nature of the journey, a number of these people perish in the process, either on the high seas or desert of Libya, or in the hands of armed bandits, and kidnappers.

However, a good number of the youths still made it to Europe – their “dream land.”  But the dream land often becomes bitter to these migrants who entered without the right documents and through illegal entry points.  They are therefore subject to return.

WHAT IS FORCED RETURN?

Forced return is the act or process of taking back a migrant to a country of destination or transit and a country of origin which involves force, compulsion, or coercion.  This definition is adapted from the IOM Glossary on Migration, 2019.

In Europe, where a lot of Gambian migrants are, every year, around 500,000 foreign nationals are ordered to leave the European Union because they have entered or they are staying irregularly, according to the European Commission Migration and Home Affairs.   However, only around 30% of them return back to their home country or to the country from which they travelled to the EU.

The EU cooperates very actively with the countries of return of irregular migrants, in particular through re-admission agreements.  These agreements set out clear obligations and procedures for the authorities of the non-EU country and of EU Member States as to when and how to readmit people who are irregularly residing.

In the case of The Gambia, in addition to these agreements, EU have a legally non-binding re-admission arrangements with The Gambia and few other countries, including Guinea and Ivory Coast which are reluctant to engage in negotiations on re-admission agreements mainly due to internal political considerations.  Notwithstanding, under the legally non-binding agreement, EU countries can still return citizens of these countries.

Out of the 40,000 Gambians who arrived by sea in Europe between 2014 and 2017, during the peak years of the Mediterranean migration crisis, very few have been granted refugee status, The New Humanitarian has reported.

Returns from Germany began accelerating after The Gambian government agreed to a legally non-binding re-admission arrangement with the EU.

From Germany, in the first half of 2018, 211 Gambians were deported by according to the report published by the Standard Newspaper.

As of January 2020, around 2,600 Gambians were at imminent risk of deportation, and a further 6,000 asylum cases were pending, at the time.  In total, an estimated 10,000 Gambians in Germany were potentially subject to return, as of January 2020, according to a report by Berlin-based think-tank the European Stability Initiative.

While it is not clear whether all the 2,600 were eventually deported, in January 2021, fourteen Gambians were put in a detention camp in Germany, set to be deported back home subject to Gambia government’s approval.

In November 14, 2022, a chartered flight carrying 25 Gambians deported by Germany and other EU states arrived in The Gambia.

The director of Migration and Diaspora Affairs at the Ministry of Foreign Affairs, Musa Camara, had told The Standard newspaper that it was the prerogative of every country to extradite a particular set of migrants.

HOW DOES DEPORTATION OCCUR?

Deportation custody can be imposed as soon as the fixed date of departure has been exceeded by 30 days. The maximum period of detention is 18 months. Asylum-seekers who persistently refuse to cooperate with authorities in determining their identity will be held in so-called Mitwirkungshaft or “participatory detention,” a newly established category of detention. However, there must be a “sufficient prospect of deportation” in order for a deportee to be detained in this way.


For migrants to be forcefully return, there could be numerous reasons such as: