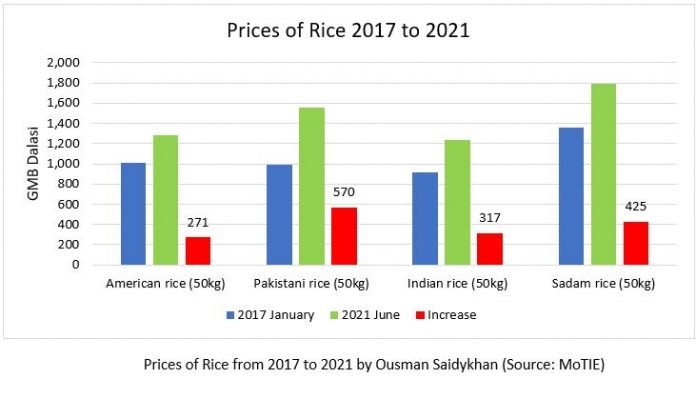 Claim: Price of rice has not increased since Yahya Jammeh left the country in 2017

On Sunday 28th November 2021, then incumbent and now President-elect, Adama Barrow was addressing his supporters at a rally in Faji Kunda, a town within the Latrikunda Sabiji constituency.

Barely one week before the 4th December, 2021 Presidential Election, President Barrow claimed that a price of a bag of rice had not increased since former President Yahya Jammeh fled the Gambia and went into exile in Equatorial Guinea in January 2017.

Between 4:08:55 and 4:09:43, President Barrow, speaking in Wolof, claimed (that “a bag of rice was D1,300 when Jammeh was leaving this country while a bag of Sadam was D1,500. When Yahya Jammeh left this country until now, the price of rice is the same. I don’t know whether people can remember that?”

Information obtained from the Ministry of Trade, Regional Integration and Employment (MoTIE) indicates that price of rice fluctuated on a weekly basis. Based on the research done by FactCheck Gambia on the prices of rice from 2017 to 2021, the figures show that prices of rice have not been stagnant since former president Yahya Jammeh fled the country in 2017.

In conclusion, President Barrow’s claim that the price of a bag of rice has remained the same since Jammeh left was False.

Factsheet: Gambian Passport Holders Can Travel to 70 Destinations without Visa