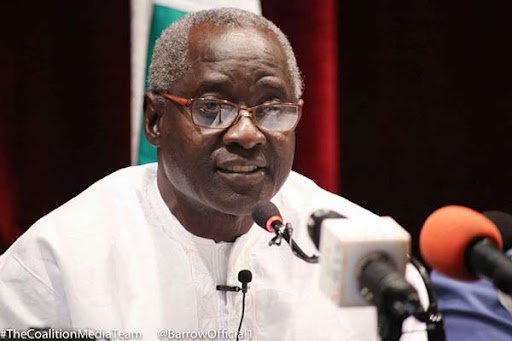 Claim: Halifa Sallah, presidential candidate for PDOIS has asked voters to accept money from politicians who offered them bribe in exchange for votes. But vote against them out for System Change.

A digital flyer with a picture of Halifa Sallah, the presidential candidate of the People’s Democratic Organization for Independence and Socialism (PDOIS), is making the rounds on various social media platforms, especially WhatsApp. The flyer contains a message attributed to Mr Sallah, alleging the presidential hopeful is asking voters to accept money given to them by corrupt politicians in exchange for votes. But vote against the politicians for System Change.

It is worth noting that System Change is the campaign theme of the PDOIS ahead of the 2021 presidential election.

This statement has been carefully studied by the Malagen media monitoring desk. We are currently monitoring all election campaigns, including the PDOIS presidential campaign and have reviewed the campaign addresses made by Halifa Sallah. But we have found no evidence that Sallah made the statements being attributed to him.

We have monitored news publications and social media accounts linked to the PDOIS. There too, the remarks could not be found. The PDOIS information bureau as well as its communications who are following Halifa’s campaign meetings have denied that Mr Sallah made the statement.

Moreover, the flyer does not indicate when and at what platform Halifa made such claims. Halifa himself has denied the remarks attributed to him and provided the following clarification.

“What I have been saying is that 2016 was the liberation of the Gambian people. Now they own themselves and cannot be intimidated or induced by anybody on the phase of the earth. So, anybody who allows himself to be induced or intimidated would have sold himself to slavery.”

The claim being attributed to Halifa Sallah is FAKE. Facct Sheet: Should Parliament Have a Say in ECOMIG’s Extension in The Gambia?