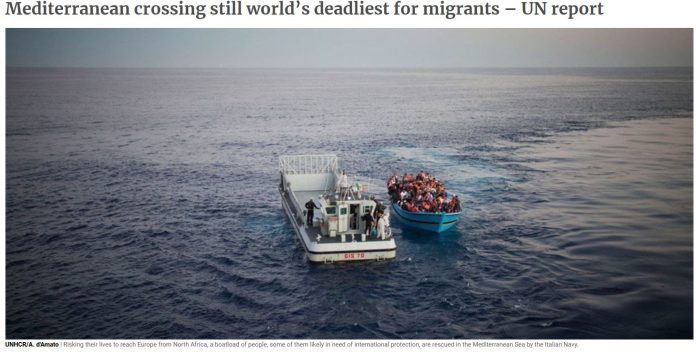 Over the years, a number of Gambian youths have risked their lives by embarking on irregular migration to reach Europe in search of a better life.

Those who embarked on this journey left The Gambia without the right or proper documents to enter Europe and through  routes that are not only irregular but also infested with every kind of danger: kidnapping, rape, extortion, torture, slavery, and murder. As the journey includes using a boat either, incidents of boat capsizing are not uncommon.

But what pushes young and able-bodied youth to such risks? Unemployment and poverty.

‘’Migration in the Gambia is highly driven by economic reasons, specifically poverty and unemployment’’, a 2020 report titled ‘The Gambia-Migration Decision Making and Journey ‘says. ‘’ Migration routes can be very dangerous and there is a high awareness of the potential risks, nevertheless Gambian nationals decide to take the journey’’.

Similarly, according to the 2018 Gambia Labour Force Survey, 95 per cent of Gambian irregular migrants surveyed cited “lack of work” as their primary reason for migrating.

Conducted by the Gambia Bureau of Statistics (GBoS), the 2018 survey shows that out of 22,948 people who migrated from The Gambia to Europe through irregular routes, 21,294 or approximately 93%, were reported to be unemployed at the time when they left the country.

The survey report further indicated that a high youth unemployment rate of 41.5 per cent exists in The Gambia.

“The youth unemployment rate is higher than the rate for adults,” the report said, adding: “Youth ‘Not in Employment, Education or Training (NEET)’ stands at 56.8 per cent.”

Between 2003 and 2013, the youth population increased from 489,666 to 690,836, representing an increase of 41.1 per cent or an annual growth rate of 3.4 per cent.  It is expected that with the persistent high fertility rates, young people will continue to constitute the majority of the population for the foreseeable future.

The bulging young population of the country poses both social and development challenges to the country. Young people continue to be disproportionately affected by unemployment. This results in the young people seeking alternative means of livelihood including irregular migration.

A joint migration study conducted by Action Aid International-The Gambia and Action Aid-Denmark entitled: ‘Back Way to Europe: How Can Gambia Better Address Migration and Its Development Challenges’ has revealed that Gambians made up 8,681 of recorded arrivals to Europe by sea between January 2017 and March 2018.

“The study suggested that unless and until The Gambia improves job prospects and agricultural livelihoods, which involves seriously addressing climate change, the migration flow from the country is likely to continue. One recommendation is for the government to focus on agriculture where some 70% of Gambians earn their livelihoods while the governments of rich northern countries who have caused climate change should be doing much more to address it’’.

The Global Youth Development Index of 2020 ranks The Gambia 139th out of 181
countries on its efforts in youth education, employment, health, equality and inclusion, peace and security, and political and civic participation.

“On average, Gambian youth have more education than their elders. Almost six in 10 young Gambians (58%) have secondary or post-secondary schooling.  But they are also more likely to be unemployed: A quarter (25%) of young Gambians are looking for a job, compared to 21% of middle-aged and 16% of older citizens,” says Afrobarometer, a pan-African, nonpartisan survey research network, which is led in The Gambia by the Centre for Policy, Research and Strategic Studies (CepRass).

In view of this, young Gambians are leaving the country in teeming numbers. According to official estimates, nearly 12,000 Gambians arrived in Italy via the Mediterranean Sea in 2016, a 36% increase from 2015, making the country among the top five nations in terms of the number of citizens who crossed the sea from Libya to Italy.

To solve this unprecedented crisis, sufficient and quality job opportunities should be provided for youth to make them stay at home.

In this vein, national and international organisations have taken initiatives to address the issues of unemployment as a factor for irregular migration.

The Gambia Youth Empowerment Project (YEP) was established in January 2017 to address root causes of irregular by providing the skills and employment of potential and returning migrants.

The International Organization for Migration (IOM) has launched a vocational training programme aimed at equipping Gambian youth with the skills to engage in entrepreneurial ventures or seek employment.

This initiative forms part of a larger IOM project, funded by the Italian Agency for Development Cooperation (AICS), aimed at bringing together youth, diaspora and local authorities to promote employment and address irregular migration in The Gambia.

Has President Adama Barrow Delivered on his Promise to reduce unemployment?

Fact Sheet: Did President Barrow Construct Over 600km of Paved Roads in 5 Years? No.