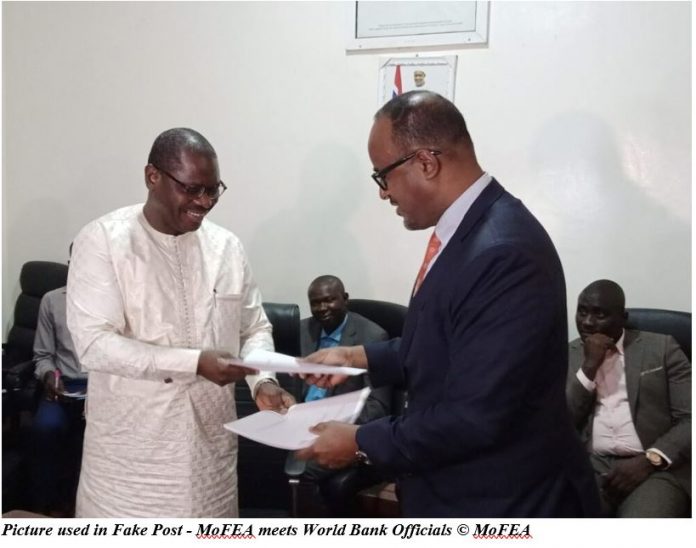 On August 1, 2022, Gambia’s Ministry of Finance and Economic Affairs (MoFEA) published a an alert on Facebook and Twitter that “some scammers have ‘cloned’ the MOFEA #FB_Page with the intention to deceive and lure their victims into paying money for a false claim.”

This is not the first time that the Ministry is forced to issue an alert on a pretend social media page. In December, 2019, it warned members of the public not to fall for the phising activities of a pretend page which was offering “loans or grants” purpotedly from MoFEA.

MoFEA’s “Fake News Alert” 1st August claim posted on its official Twitter handle (@MofeaGambia) which has over 5,595 followers, attracted little attention from the public – with 15 retweets, 14 likes and at least 5 replies and 2 responses from @MofeaGambia to comments by twitter users – indicating in one of the replies that the fake profile has “been reported”.

On the MoFEA official Facebook page, named “Ministry Of Finance and Economic Affairs Gambia – MOFEA” with over 6,700 followers, the fake news alert attracted over 14 reactions and 12 shares.

Claim: MoFEA said in the post that “the public is hereby advised to disregard the post (herein attached) making rounds on social media. Some scammers have ‘cloned’ the MOFEA #FB_Page with the intention to deceive and lure their victims into paying money for a false claim. 4 more info #Mofea_Coms.”

The page, “Ministry Of Finance and Economic Affairs Gambia”, bears similarities to the official MoFEA twitter account. It bears The Gambia’s coat of arms as a profile picture. In a post, the imitation page said MoFEA had “partnered with GEN to roll out an economic development program in the country by providing financial grants to all medium-sized entrepreneurs and farmers. The aim is to target national growth and encourage local investment and entrepreneurship. Interested candidates are encouraged to avail this opportunity and apply by clicking this link: …”

Another difference observed is that the purported post on the fake account is a sponsored post. This is quite unusual for a government page to be paying for a sponsored Facebook post given that the MoFEA does not focus on generating income through its social media platform.

From the fake news alert on the official MoFEA Facebook page, it highlights that “the photo attached [in the fake post] was copied from a post on the Ministry’s page about a signing agreement between the government (MOFEA) and the World Bank”.

Fact-Check Gambia can confirm that a Facebook post dated 23rd May, 2022 featured the same picture used by fake Facebook page. The post was about a meeting held on 19th May, 2022 between the Ministry and the World Bank.

MoFEA’s Information Officer, Ebrima S. Jallow, told Fact-Check Gambia that the issue was reported to Facebook’s West African contact on Wednesday 3rd August, 2022. Reading through the comments it could be seen that some people were concerned that the MoFEA Facebook page was hacked, however, that was not the case. Instead, the MoFEA’s Facebook page was being imitated by a pretend account.