FactCheck Gambia
Home Factsheet FACTSHEET: The Misuse of Sniper in Gambia and Its Health Impacts 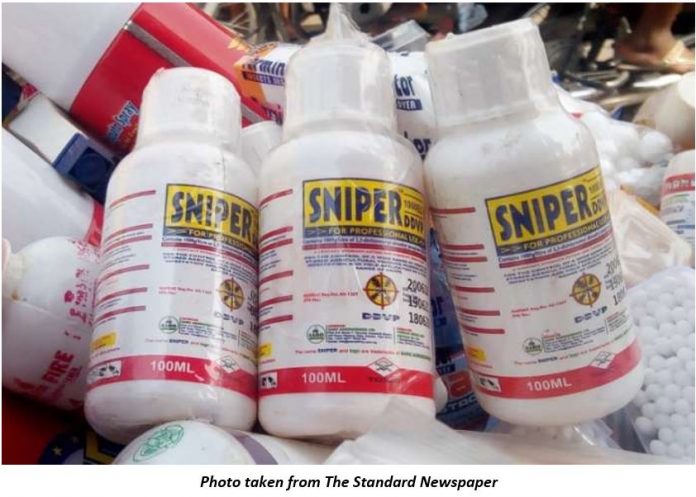 The misuse of the Sniper insecticide in Gambian homes reached a whole new level in early June 2022 when a viral WhatsApp audio featuring a woman’s voice claimed that vendors are using the poisonous insecticide to preserve smoked fish.

That claim has been found to be true.

When the June 5 audio which was first shared on WhatsApp and marked as “forwarded many times” went viral, it found its way on Facebook, Twitter and other social media platforms used by Gambians.

What followed was a massivve public outcry. The Food Safety and Quality Authority of The Gambia (FSQA), the Ministry of Health, and the Ministry of Fisheries and Water Resources immediately launched an investigation through field visits, sample collection and lab tests in Dakar, Senegal.

Made for plant protection

The FSQA investigation revealed that besides “the presence of Sniper (dichlorvos) and four other insecticide products (permethrin, abamectin, cypermethrin and bifenthrin), the results further indicated high residual concentration of dichlorvos in the samples collected from Bakoteh fish market with a concentration of 9.18 mg/kg.”

According to the FSQA, Sniper was originally formulated as a plant protection product to be used only for agricultural purposes (at 1000 g/L). It is also used as biocide at much lower concentrations (mostly 25 g/L).

The poisonous chemical product is also clearly labeled that it is meant for outdoor use by its manufacturers. However, the product is being misused in The Gambia for indoor purposes and as a fish preservative.

In The Gambia, Sniper is misused used indoors to eliminate insects like mosquitoes, bed bugs, and cockroaches.While this practice appears normal, the insecticide is inimical to the health of men, women and children and it is not recommended for indoor use.

Sniper, which contains a chemical called dichlorvos, also known as DDVP, and is primarily manufactured for outdoor agricultural purposes.

This Factsheet highlights the dangers of misusing Sniper by interviewing Health Experts and conducting research on Sniper insecticide.

Our research has revealed that Sniper insecticide is produced by a company based in the United States named Loveland Products. The company also has headquarters and locations in Australia and Canada.

According to the company website “Sniper is a highly effective insecticide/miticide that controls over 30 foliar and soil borne pests. Sniper gives growers the flexibility and residual activity needed to combat insects in conventional or biotech systems”.

Foliar and soil borne pests are diseases that affect plants, however, the website also adds that “Sniper is a restricted use pesticide”.


According to a Loveland Products Sniper brochure the insecticide is “toxic to fish and aquatic organisms” and “may be fatal if swallowed”. Under the precautionary statements section in the Sniper Brochure, the product is a “hazard to humans and domestic animals”.

To mitigate the hazards, Sniper users are recommended to wear personal protective equipment like long clothing covering their skin and chemical resistant gloves. One warning note advises Sniper users of “substantial but temporary eye injury”. To avoid eye damage the Sniper Brochure instructs users of the product “not to get in eyes or on clothing” and to “wear protective eyewear”.

More warnings indicate that Sniper is “harmful if inhaled or absorbed through [the] skin” and for users to “avoid breathing vapor or spray mist”. Generally, it’s recommended to “avoid contact with skin, eyes, or clothing” and to “wash thoroughly with soap and water after handling and before eating, drinking, chewing gum, using tobacco, or using the toilet”.

It’s worth noting that the product information available on the website indicates that the active ingredient in Sniper is Bifenthrin.

According to the Minnesota Department of Health, United States, some of the “potential health effects” are that people who are “occupationally exposed to bifenthrin report mild effects such as skin tingling or eye irritation”.

Under its Contaminants of Emerging Concern Programme, the Department stated that “studies on laboratory animals, exposure to high levels of bifenthrin affected the nervous system, causing tremors in animals. Animals exposed to very high levels of bifenthrin developed bladder cancer; however, cancer is not likely to occur at lower exposure levels.”

Health experts have warned about the dangers associated with the use of the Sniper insecticide.

“Sniper insecticide is dangerous to human,” Dr. Phebian Ina Grant-Sagnia, the Principal Health Researcher at the Ministry of Health (MoH), told Fact-Check Gambia. “Sniper insecticides can cause poisoning after being swallowed, inhaled, or absorbed through the skin. Symptoms may include eye tearing, coughing, heart problems, and breathing difficulties,” she said.

Dr. Grant-Sagnia said that “Sniper is a very dangerous chemical; it can be very poisonous and can cause respiratory paralysis and death. It can also, over a long period of time, lead to damage of vital organs like the brain, liver, kidney and even cause cancer.”

The principal health researcher said that immediate health effects from pesticide exposure include irritation of the nose, throat, and skin – causing burning, stinging and itching as well as rashes and blisters. Nausea, dizziness and diarrhea are also common.


Three years before the FSQA investigation revealed the use of Sniper and other insecticites as smoked fish preservatives, the National Environmental Agency (NEA) had banned the importation and usage of Sniper insecticide, according to a Foroyaa newspaper story published on 27th February, 2019.

The NEA said in a statement that licensed business persons and entities in possession of Sniper should surrender the product to the Agency’s headquarters in Kanifing or at its  regional offices or the nearest public health office for safe storage.

It also said that unlicensed applicators engaged in the use of Sniper and other banned pesticides or chemicals are warned against its importation, use and distribution. Those in breach of the ban “risk facing the full force of the law”, the agency said. However, the authorities failed to implement the ban as the insecticide remained a regular product in the market – available, affordable and accessible till date.

On July 29, 2022, the NEA renewed the ban on Sniper during a press conference reported by local media here and here. Besides the Gambia, countries which have banned the use of Sniper include Nigeria – whose government said in June 2019 that the agro-chemical was being used by people contemplating suicide.

Some States in the United States of America have also banned the product, details of which could be found in the Sniper Brochure of Loveland Products Inc.

Factsheet: Gambia’s Debt to GDP Ratio Has Declined, But Does it Mean Pres. Barrow Has Not Been Borrowing?