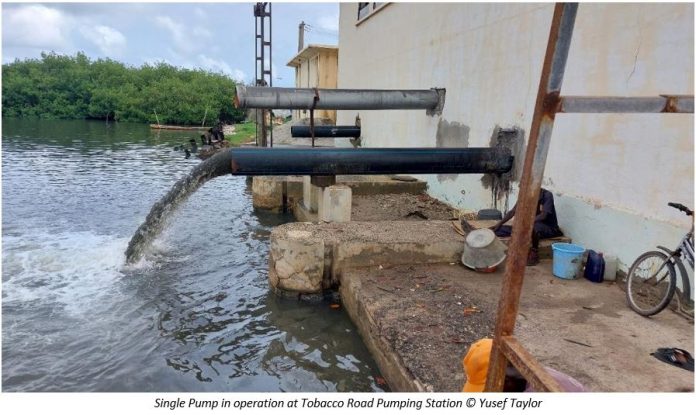 Every rainy season, the capital city of The Gambia, Banjul, which is surrounded by water and mangroves, becomes heavily inundated with rainwater. Banjul is home to State House, the seat of the Presidency, the National Assembly and the offices of numerous government ministries, departments and agencies.

In a televised address at his annual meeting with Banjul Muslim Elders on the occasion of Eid-ul Fitr on May 2, 2022, President Adama Barrow promised to fix the pumping station and a number of open gutters which he referred to as big holes across the city.

Speaking in the Wolof language, President Barrow said: “I will make sure that every street, corner and gutter in Banjul will be filled. We are working on these things. I have spoken to the contractors about every road in Banjul to get progress updates.”

He went on to reveal that just the previous week he had spoken to the contractor, Hadim Gaye, on the status of the project. “Just last week I spoke with Hadim, asking him about the smaller roads that were outstanding and their progress. I was very pleased with the progress report that he gave me. I told him now the outstanding works are the big gutters at Grant Street, Kombo Street and the big gutter around the National Library. How are we going to deal with them? Also, the pumping machines to pump flood water from Banjul? What’s the progress on these?”

President Barrow continued to explain how contractors informed him that “all the machines are in the country but at the moment there is no problem there that’s why I haven’t fixed the machines but they are all here.”

“Mr. Hadim told me that the big hole next to National Library, ‘we’ll cover it all and fix it well’. I want to tell the people of Banjul that they have no problem to worry about and I will continue working with them.”

Barrow did not give a definitive timeline to fix the gutters, pumping station and associated flood problems.

However, it is now three months since the President’s address. And given the heavy downpour that took place in the second half of July 2022, which in some cases lasted for more than 24 hours, Fact-Check Gambia visit locations mentioned by the President on Tuesday 26 and Wednesday 27 July to ascertain the state of affairs.  And more so, the ability of the completed works to withstand any overflowing water resulting from the torrential rains.

Site visits were made on July 26 to Kombo Street, Grant Street and the major canal waterway in Banjul known as Albion Street or Bob Marley Street. The progress of works on Albion Street has been included due to its centrality in addressing flooding in the city. It is noteworthy that Albion is not assessed as part of the promises made by the President since it was not mention in his Koriteh address to Muslim elders. Kombo Street: New construction work were observed around the intersection of Kombo Street and Albion Street. However, our enquiries indicate that while water flows in and out of these two streets, waste currently clogs the canal waterway which needs proper clearing to allow for regular water flow.

After walking through the entire street, it could be seen that the open gutter is still in place. Although all the open gutters have still not been covered, some groundworks have been observed where Kombo Street meets Lasso Wharf Street. Workers on site said that they had just started groundworks at Kombo Street.

RATING: We rate Kombo Street as WORK IN PROGRESS. Grant Street: At Grant Street, the open gutters are no longer visible because they are all covered. There have been improvements in the cleanliness of the street. Previously the open gutters produced a foul smell, however, this has reduced drastically due to the construction works completed at Grant Street. One end of Grant Street leads to the middle of Banjul commercial vehicles garage and the market, a very busy area for commuters and market vendors.

The photos taken at Grant Street shows that most of the construction works have been completed with only the construction of bollards outstanding. Bollards stop vehicles from driving onto the concrete closed gutters which could result in damage from heavy duty vehicles. Heavy duty vehicles could damage the concrete panels and re-open the closed gutters. Vendors at the market said that contractors started work in 2021. Below are photos of the works observed at Grant Street.

Years after Albion Street was covered with concrete panels, they were removed, exposing the canal and the stagnant water underneath. This made it a key breeding ground for mosquitos which directly links to the prevalence of Malaria among Banjulians. At the top of Albion Street, it was observed that contractors were at work covering the open canal with concrete panels similar to works completed at Grant Street.

In the middle and the bottom of the street, the open gutter contains waste and emits a foul odour. While no verdict is necessary in relation to the President’s promises on May 2, the canal remains key to the waterway that empties into Tobacco Road. Work is visibly ongoing.

Fact-Check Gambia visited the National Library and the Pumping Station at Tobacco Road on 27 July. The progress of works was captured on camera to illustrate the amount of construction works done. National Library: The situation at the National Library looked very concerning as the entire place was inundated with rain water except from the pathway between the gate of the library and the entrance to the building.

The waterway right next to the National Library goes under a bridge. It is observed that some construction materials are assembled close to the bridge suggesting that some construction works are planned. A worker at the National Library said some efforts were made to clear the waste clogging the waterway, however, this effort has not been effective.

Our observations showed that significant construction works have not been completed to alleviate flooding at the National Library.

RATING: We rate National Library as PROMISE NOT KEPT SO FAR. A sluice gate was observed at the bridge where water flows through the pumping station. The sluice gate allows water to flow into and out of Banjul depending on high or low tide.

A closer look at the sluice gate shows that it is very old and requires replacement or some form of repairs. Photos taken from this location shows that sluice gate was closed and water was not flowing through it.

Workers at the pumping station said additional water pumps with an operational sluice gate are needed to allow water to flow into and out of Banjul more effectively.

RATING: We rate Tobacco Road Pumping Station as PROMISE NOT KEPT SO FAR. Conclusion: From observations made during two site visits, it could be seen that out of the four locations that President Adama Barrow promised to address, construction works at Grant Street are almost complete, while ground works have commenced at Kombo Street.

Meanwhile, there was no visible construction works at the National Library and only one water pump is operational at Tobacco Road Pumping Station.

Three months since the President’s promises, only one out of four locations are nearing completion.

Given the observations made, it can be seen that President Adama Barrow’s Koriteh promise to fix Banjul remain largely unfilled so far.

Has President Adama Barrow Delivered on his Promise to reduce unemployment?