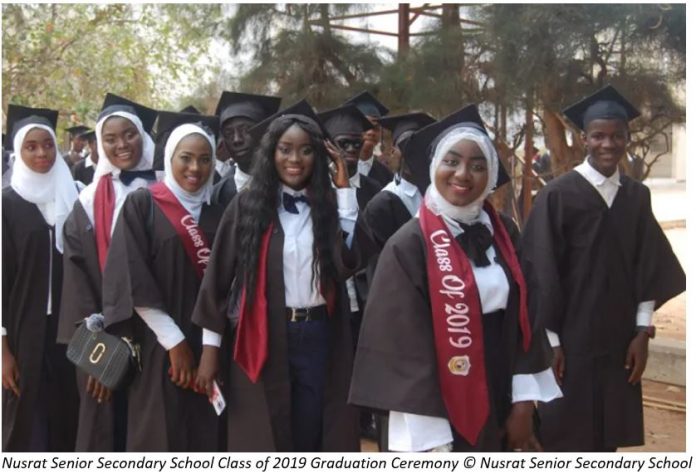 By Louise S A Taylor (@AlsanLouise)

Claim: “…the ministry has banned the wearing of gowns for senior secondary school graduation…”

A post shared on Facebook by the popular Gambian-owned gossip website, What’s On-Gambia, alleged that the Ministry of Basic and Secondary Education, MoBSE, has banned grade 12 students from wearing graduation gowns.

The social media post made on 8th July 2022 was shared about 5 times and attracted almost 1,000 reactions and more than 300 comments from Facebook users.

In the post, the website, also known as WOG, quoted a student of Kairaba Senior Secondary School as saying: “Our school principal invited us yesterday to discuss our graduation ceremony. He told us that the ministry has banned the wearing of gowns for senior secondary school graduation – meaning it’s only for university students.”

Online commentators have raised concerns and argued that the Ministry should focus on more important issues. One even described the purported ban on the use of graduation gowns for high school students as “bizarre”.

However, others pointed out that MoBSE had already issued a ban on student levies prior to the alleged graduation gown ban.

One commentator who appears to believe there is a ban, also noted that the charges of hiring graduation gowns have been a burden on poor parents, especially in provincial areas of the country.

Apart from the direct quote attributed to a student, What’s On Gambia, seems not to be sure if the information it was sharing is true or not. It’s heading asked: Are Grade 12 students banned from wearing academic gowns?

When contacted to shed light on the alleged ban on gown-wearing high school graduates, MoBSE’s Permanent Secretary, Louis Moses Mendy, said his ministry did not issue a blanket ban on the use of gowns by secondary school students.

He said that the Ministry has banned schools from charging their students extra fees thereby putting a financial burden on them or their parents or guardians.

“MoBSE will not allow any school to charge students or parents for the use or procurement of gowns,” Mendy told Fact-Check Gambia via phone.

However, he said the Parents Teachers Associations or the Senior Management Teams are free to take up that initiative on their own.

Ban on all school levies

According to publicly available information, MoBSE had issued a general ban on all levies that comes as additional costs to students in government schools and government-aided schools.

The School Improvement Grant (SIG) is meant to ease the burden of school fees on parents, according to the Ministry.

In October 2021, MoBSE told school heads in Region One (Kanifing Municipality) to stop charging students “illegal levies”. A Ministry official has warned that those who failed to pay heed risk removal in stories published here, here and here.

Based on our research and findings, we found the post by What’s On Gambia to be MISLEADING as the ban is not specifically on the use of graduation gowns but on fees charged to students for the gowns.

Fact-Sheet: What You Need to Know Before, After Taking COVID-19 Vaccine